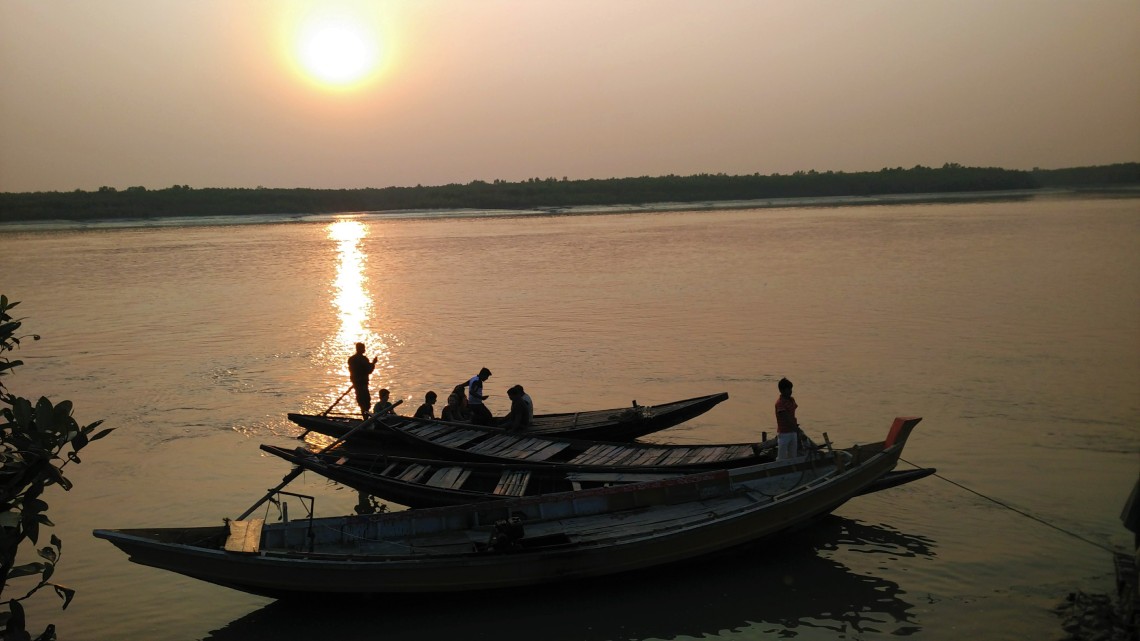 “Don’t grab the crabs!” the major said, laughing. “Just gently pass the branches behind.” We looked at each other, the ten of us, wondering if we had heard correctly. We had been in the waters for fifteen minutes, gazing at the star-lit sky when she quipped again, “Next time ensure you come on a moonless night, it’s easier to see the luminescence.”

Crabs? Luminescence? It was easier to lose yourself in the skies, lying on the broken wooden plank, listening to the oar cut the water than think about these things. As things would go, we were at a standstill after a few minutes, with just the water lapping up against the wooden hull. We had reached.

A few hours earlier, we had checked out the periphery in the same boat, skirting closer to the mangroves but never venturing inside. Now, close to midnight, we were about to do just that. The water level had risen alarmingly. The trees we saw during the day were all but submerged; only the top branches remained in sight. We were to use these to venture inside, grabbing them to steer the boat through the narrow enclosure.

Our first attempt didn’t go so well, we got meshed in and had to pull out. Despite the moon, there was little visibility; the rustling of the leaves our only cue. It continued to grow darker as we went ahead. It was then that someone said torches and a shriek escaped my lips. I was inches from grabbing a crab! The branch alone had four, neatly lined, and a quick sweep showed dozens of them.

I would later learn that the ecosystem supports different kinds, including the mangrove, hermit, fiddler and mud crabs. The first two crustaceans can climb trees as well as burrow. In fact, by digging burrows and consuming leaf litter they aerate the sediments and cycle the nutrients. At that moment though, I wanted nothing to do with those branches. The collective sigh meant no one else did too.

Earlier that morning, we had left Kolkata for the biggest mangrove forest in India – the Sunderbans. It took us almost four hours to reach the last road point Godkhali. From there, we took a ferry, a bumpy ride aboard ‘motorcyle-autos’, waded through the waters again before reaching Sukumari. The villagers here had given up two acres of their land to develop a eco-venture with a Kolkata-based company, Tour de Sunderbans. There were mud huts, plenty of chicken moving about and even a fish breeding ground. Just outside were the paddy fields, children riding cycles and men manning the boats, ready to take you circling around the mangroves.

Come summer, as the visitors dwindle, they would probably have to go back to collecting honey – a dangerous proposition, willfully undertaken for the lack of options. As is oft-repeated, every home has a tiger story here. Of honey collectors who never came back, fishermen with scars, women left widowed and families torn apart. Of excessive hunting of mud crabs for export, threatening the ecosystem itself.

For now though, in December, there is a nip in the air. At the village, with the sun down, a bonfire is lit and baul singers take center stage. The reverie only broken by the aloo bhaja and fish curry prepared by the local woman.

The next morning, aboard Elmar, at the forest watchpoints, there is cognisance of the fact that the Bengal tiger may remain elusive. There are plenty of birds to spot though – the kingfisher, egrets, crocodiles, spotted deers, cormorant. More interesting is the flora – there are 26 varieties of trees that form the mangroves in Sunderbans. The most common are the Sundari trees that can survive in both salt and sweet water, Dhudul with the hanging fruits, bain, goran, keora, hental among many others.

Moving about in the waters, past the ‘panchmukhi’ or the point where five rivers meet and back to the start, silence settles in. Without realising you turn into the crocodile lying on the marshes, lost in thoughts, oblivious to the company around. Till a footprint, shadow or passage of the deer reminds you of the predator near at hand. Always there, lurking in the minds and shadows, without showing itself. As fishermen tell Shamik Bag, “If you see a Sundarbans tiger in the wild there is little chance you’ll be seen again.” We don’t. We are free to leave, only to return when the jungle calls.