When I first landed there, the kids were practicing for a dance competition. Nepali melodies were blasting off the lone speaker as the teachers corrected the steps and got the formation right. Seated on a small stool, a step above the veranda, I marvelled at the conceptualisation as the tune imprinted itself into my memory. 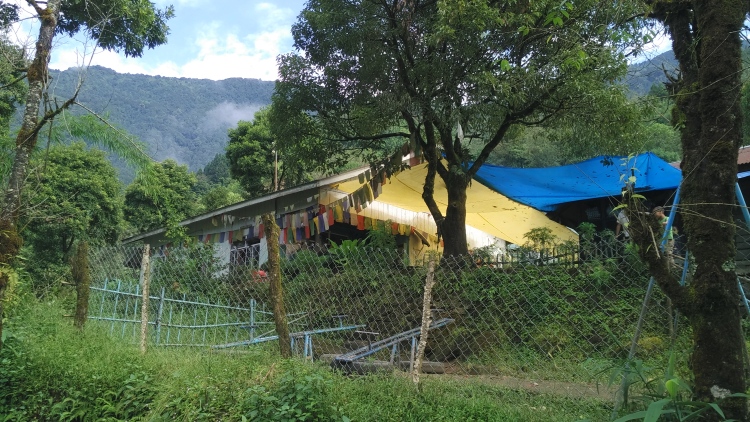 For the next few days, this small private school in remote Sikkim, in a village called Buriakhop, was abuzz. The seniors were busy perfecting the props, the smaller kids practicing, someone was segregating the costumes (some borrowed, some bought on lease), others preparing the traditional ‘sel roti’ to give it a whole Dusshera feel. There was so much enthusiasm in the air about an annual school function, it was hard to fathom. 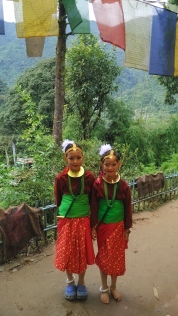 Yet, if you leave out the hour-long speeches, the function was a treat. I got to see a snow lion dance, typically part of the Chaam festival, celebrated in December; a skit on Sikkimese marriage rituals and to cry foul about a judge and his comments. There was also the pride of coming in third, seeing the kids exhausted yet happy, and taking the certificate home. 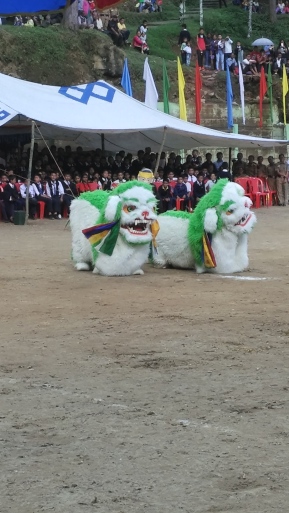 The snow lion dance is part of December celebrations in Sikkim

Look at the expression!

The following days we ate food in the mess, post the chaotic yet rhythmic Buddhist chants, played games, made up stories, read a few lessons, tried Sudoku, watched a few movies and took loads of pictures.Outside the school hours, when the final gong went at 4:30, I learnt to make momos, went on a short hike over rickety bridges with the kids and listened to bedtime stories in the small loft above the classes, where they resided.

As I learnt a little about Sikkimese culture, with each passing day and each acquaintance, I slowly made my peace with the multiple steps – moss-covered yet inviting – to reach any house in the village. I also made peace with eating squash and no chapatis, with dinner at 6 pm and the sun packing up at 5 pm sharp.

This trip, a long one, wasn’t about material comforts or sightseeing. I had to sleep on a rickety bed, with a less than perfect washroom, sometimes having only the plain old bread for breakfast. Yet, I learnt so much about Sikkim that I wouldn’t have if it weren’t for this volunteering experience. When I applied, I was highly skeptical about working with kids, having never done that before. It turned out to be simple really, you just had to be there, listening to the multiple things they had to say. The smiles, the laughter, it all came naturally, especially with this kid who burst into laughter every time you looked at him.

The last day was a contrast though. The kids got together for hours to write thank you notes. I got some walnuts and a one-eyed teddy from a small girl called Roshna. It was probably her most prized possession as all these kids come from financially challenged backgrounds. Later in the night, they told poems, sang songs and even danced just for me. In barely two weeks, I had gotten back more than I put in. It was really humbling. But then probably that’s the beauty of volunteer travel.

Ps: The school doesn’t charge fees and runs on donations. Do visit their website and donate money, books or some time if you can. Go to http://www.sikkimhimalayanacademy.org/donate-now.html