It’s a torenia for the tomato. A few days ago, it surprised me with two yellow flowers. It’s been tricky this tomato, almost an enigma. Just when I am about to give up, it grows a few new leaves, a stem, the promise of a bud. For a year now, it’s been showing these abrupt signs of potential, making it harder for me to uproot it. In some ways, I think, it has had a difficult life. The last time the flowers bloomed, cyclone Tauktae blew them away. It’s neighbour, the chilli, grew white mold and died. It itself remains anemic even though I’ve cut off stems, used homemade and store-bought fertilisers, and changed its position to maximise sunlight. 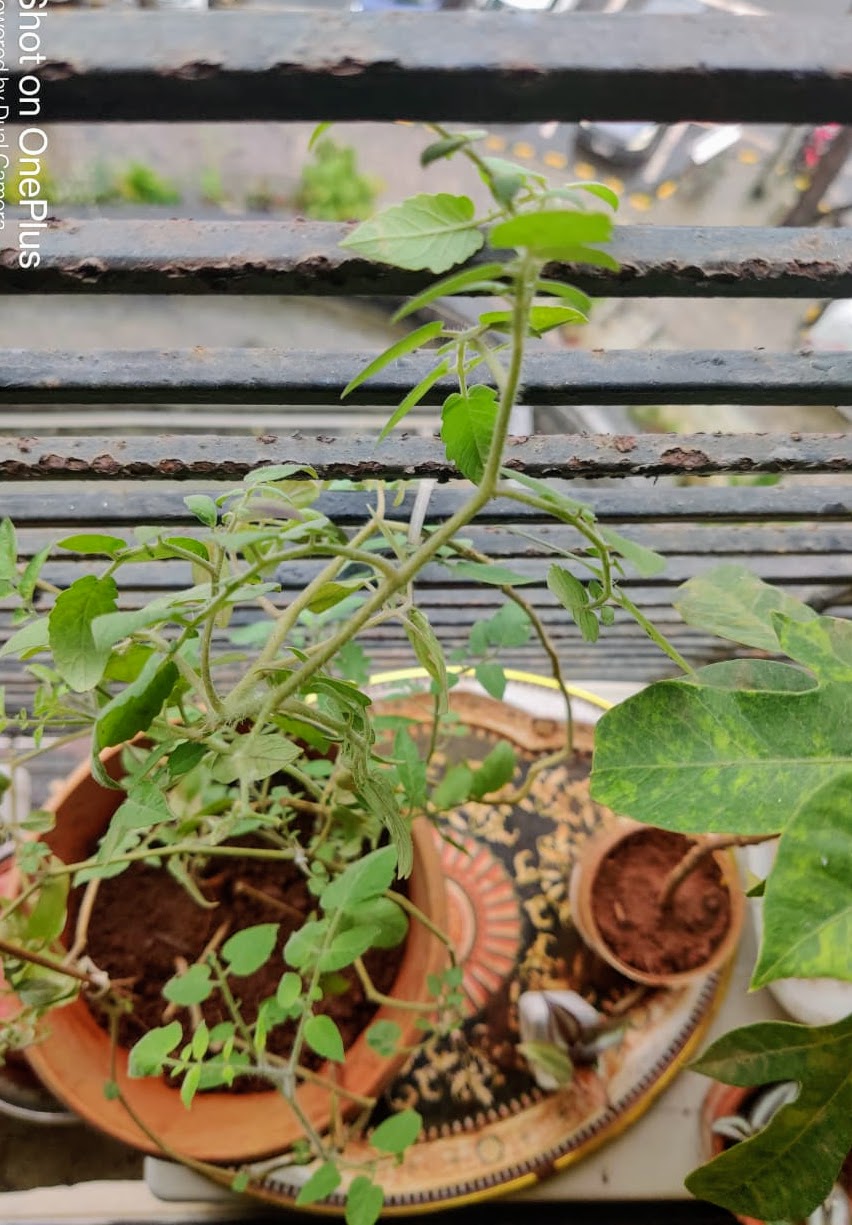 I don’t profess to know what I’m doing with the tomato or other plants that have somehow inhabited my windowsill over the last year. In the beginning, there was just a bunch of basil propagated in water and planted in a pot without much hope. It took root and grew as the world shrank. The pandemic forced everyone indoors. Terraces and windows became our eyes to the world – one that had suddenly become bereft of activity. In the days that stretched ahead, there was anxiety but also a strong urge to survive. Dusty board games were brushed off, the evenings were spent relearning card games. All the creativity was channeled in the kitchen. There was a push to grow vegetables to minimise visits to the market.

So came the pots and soil and fertiliser. The coriander refused to sprout. The curry leaf came at some point, four spindly stems with petite leaves. It was languishing like us, stuck in a smaller pot than it would have liked. We just couldn’t keep pace with the mint; It got a bigger pot. There was a spider plant, a gift from the sister sometime before. They were dutifully watered, sometimes pruned; the chilli and tomato surveyed for signs of life. Some more came with the relaxations – the money plant and aloe vera, again from the sister. A visit to the dentist got a jade. A robust tulsi plant joined the gang.

The little window garden kept growing, letting me harvest a few leaves every now and then. In the beginning, it was merely a fleeting concern. Soon, it looped me in. It made me into a hawk. Now I’m either waiting for the leaves to uncurl, smelling the basil, pruning the mint, eyeing the tomato or laying honey traps for gnats, inspecting spots and buying more pots than the space can hold. In the past, it would have been the pine forest, the blanket under the gulmohar, a fern to press into a book. A walk through the wilderness, eating wild berries, crossing small river streams. Away from it all, it’s become my connection with nature. It’s grown on me. It has brought focus, surprise, learning, respite and joy on even the bleakest of days.

When the pandemic began, we didn’t know how it would transform our lives. Now, there is only exhaustion. A collective grief that runs deep for the lives lost. An anxiety that clouds everything, laces each act. Time has a funny feel to it. It seems we are running in the same endless loop of activity or inactivity in the same four corners of our home. But if you look closely, the churn is continuous. The tomato is still hanging in there. The curry leaf has grown a canopy of leaves. The basil has a string of tiny white flowers, which means it is probably at the end of its life cycle. The aloe vera is soon going to topple the pot. Maybe we exist somewhere in this spectrum as well – between wilting and thriving. Longing for a little colour to help us along. Now if the torenia would also bring in the bees, I want that darn tomato!