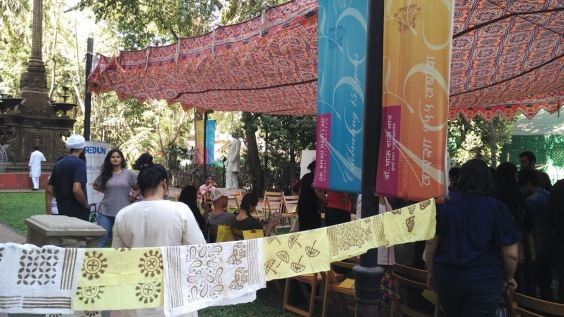 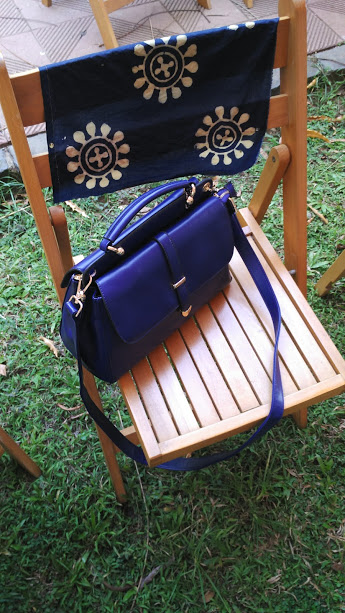 They were among the first ones to go up. Flapping back and forth on the flimsy wire, my eyes kept returning to those printed dupattas as the tables were padded up with layers of white cloth. Were we to make these? Seated outside, on the lawns of the Bhau Daji Lad museum for the Dabu block printing workshop, we were handed treated pieces of fabric. Lemon-coloured, these squares were nowhere close to the many hues of blue of those dupattas.

On the tables were different kinds of blocks. Dabu, being an ancient mud resist technique, the first task was just that – to prepare the mud. The black soil, chuna, powdered wheat husk and natural gum came from a small Rajasthani village called Bagru as did the artisans who would teach us. Passed through a sieve, this mixture then made its way to our tables and we set to work. Different hands grabbed the blocks, dipping them in the mud, hastily making a pattern, before losing it to the ever-swelling crowd. I found a flower-shaped one, imprinting it on four corners of my 4×4 before lining up in front of the lawn fan like a dutiful school kid, keen to finish homework.

It must have made a hilarious picture, for the artisans couldn’t resist taking a picture. Little did we care though, us a motley bunch of college kids, grannies, working women and even a Japanese group on vacation. The moment it all came together though was when the pale yellow background turned indigo! Even red! The block-printed pattern, in turn turning white, acting as the perfect offset. The smiles, unconstrained and apparent on everyone’s face that instant. Then, a rush then to find more lemony squares to experiment, to dip in the bucketfuls of dye so that the red and blue talk together. Me, I only had eyes for my piece of indigo sunshine, more precious than the finished dupattas on the wire, all thanks to Iteeha.

Iteeha conducts art workshops around Mumbai, bringing forth textile printing techniques such as Dabu, Shibori, Tie & Dye and more. The workshops are held at ARTISANS’, Bhau Daji Lad Museum, Social and other venues.

A shorter version was carried on The City Story