Skip to content
I am a book lover to the core and strongly believe that movies can never compare to books. This is but the case with most book lovers and is usually true. But every once in a while a movie or a play makes you sit back and take notice. It gives you the same joy that you get by reading a good book. 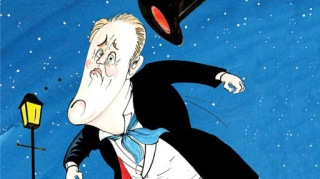 And ‘The Magistrate’ was just that – pure joy.  It was all the more special because it made me feel like I was watching a P G Wodehouse novel play out.
In the play, the Magistrate (played by John Lithgow) gets entangled in a huge mess courtesy a sequence of events that stem essentially from a small lie. Remembering Bertie Wooster are you? To help you along, Mr. Posket (Lithgow) is just as gentlemanly, gullible and averse to saying ‘no’ as Mr. Wooster. But well, Posket is married and has a step son, who is at the centre of it all. And there is no Jeeves to straighten things out for poor old Posket, but it all works out in the end.
The play essentially explores the rather sensitive aspect of a woman’s age and how a lie about it can blow out of proportion, especially when you have a child in the equation. In this case, a man of 19 being passed off as a kid of 14 has such repercussions that you are rolling with laughter throughout the play. And all in a matter of a day, you see the poor Magistrate hide under tables, run for life from the police and sentence his own wife, which doesn’t go rather well for him but there is a happy ending in store.
It is a classic case of British humour – the kind that you associate with Wodehouse normally.  But in this case, it is Arthur Wing Pinero, who penned this right back in 1885. It is but obvious made more contemporary by director Timothy Sheader.
But it is the actors who carry off the plot with such finesse. Lithgow as the Magistrate is impeccable. And every single actor lends a shade to the play. The musical interludes add to the narration rather than being disruptive and the set is a marvel in itself.
So, while I admit I haven’t seen many English plays, infact this was my first, but if a play can do that, make a Wodehouse novel come alive for a fan, it was a mighty good play, I say by Jove!